The Dabbling Mum writes several columns that are full of great information and are fun to read. She has newsletters for parents, writers, and those who operate home businesses.

This month she has a great contest (check it out here) to give away several books. However, it involves a challenge that is almost impossible for me to achieve -- choose your all time favorite book!

What is a favorite book? One that I read recently that caused me to set a new goal to read every book ever written by that author? If so I'd have to choose between The Valley of Betrayal by Tricia Goyer and Amber Morn by Brandilyn Collins.

Or, is it a book that has changed the way I look at things? In that case it would be Believing God by Beth Moore or The Power of a Praying Wife by Stormy Omartian.

Tough decisions. But I finally decided to choose a somewhat unconventional book that probably influenced the way I think early in my life -- The Penguin That Hated The Cold. This is a wonderful Disney story about Pablo, a penguin who isn't constrained by what the rest of the penguin world thinks is appropriate. He tries several methods of leaving the South Pole with little success, but he perseveres and finally finds a way to accomplish his dream of a warmer climate. There are problems along the way, but he uses his creativity to solve them and he's rewarded with the a warm, beachy life that he loves. 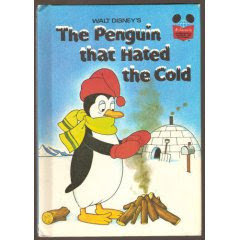 I, too, dislike the cold and love the beach. I also have been known to go against the grain once in a while and push for something I believed in even though everyone else thought I was crazy. Pablo is one of my role models and heroes (even though he's just a figment of someone's imagination).

Check out the eight books that the Dabbling Mum is giving away. I'm most interested in the one by Bill Myers, The Voice. It involves someone who steps outside of his comfort zone to help others and finds that the world isn't quite as he expected.

So, what is your favorite book?
Posted by Susan Stitch at 1:40 PM 1 comment: