I have been at an amazing retreat for a week. Seven Christian friends and I rented a seven bedroom home in Branson, MO, for the purpose of getting away from the world and writing all week. Of course, I had to bring my trusty sewing machine, since a lot of what I do is based on quilting! It has been an especially great time for those of us who are introverts. After an initial goal setting meeting the first night, we lock ourselves in our bedrooms all day working on our projects. We emerge for dinner, and spend about two hours connecting with each other, discussing projects, and holding each other accountable.

While my husband jokingly refers to this as my annual 'boondoggle' trip, I don't turn the tv on, minimize my facebook time, and I've only read about 5 pages of the novel I brought! I've researched and written a speech about women during the Revolutionary War, outlined a book proposal I'm toying around with, and designed/quilted samples for four classes I'm teaching in the near future.

Today is the last day of the retreat, and I have a list of small projects I've been putting off while the big priorities were completed. I woke up at 5:00 ready to hit the ground running. But the minute I put my feet on the floor my day got reprioritized. While still in the fog of sleep, I was wondering why in the world my feet were wet. Not just damp, squishy soak your socks wet!

Sometime after midnight a pipe broke under the sink in the basement outside my room. I didn't hear the water because I had both a ceiling fan and a portable fan providing white noise so I didn't hear those of us who stay up all night to write. The entire basement was pretty much covered with an inch of water!

Three of us set out to figure out what we could do. We ran around looking for a water shut off valve, tried in vain to reconnect the pipe with our bare hands, and trying to find something to catch the water so there wouldn't be any more on the floor.

We called the owner (with whom we'd been corresponding for a while and have developed a great relationship). They live in Iowa, and it was pretty early in the morning. They thought the shut off valve might be in the furnace room (we looked hard, but couldn't find it), or maybe outside. Two of us put our coats on over our pajamas (rolled up above our knees) and slipped into shoes -- mine were cute black flats with silver stud designs. We were quite fashionable and it's too bad the neighbors didn't see us racing around the house in the dark with our flashlights looking for a valve. It would have made quite the story!

After looking everywhere several times, we gave up and took turns sitting on the step by the sink so we could empty the large bowl we set underneath the pipe whenever it filled up. It was a pretty helpless feeling. The homeowner called the builder, who told us where to look for the shut off valve and we finally got it turned off.

We had hurriedly unplugged everything and grabbed all the stuff off the floor in our rooms and the basement (all my sewing stuff) and piled it on tables or even outside on the patio. We lifted up the pool table and put grocery sacks around the pretty wooden feet in an attempt to protect them. At that point all we could do was wait for the plumber, who was on the way.

He quickly diagnosed the problem and went to his truck for a replacement part. He was still working under the sink as I packed my room closeby when I heard him laugh outloud. Hmmm -- that's not necessarily a good sound! I went out to see what was so funny, and he showed me the part that broke. It still had the label attached that very clearly stated "Flood Free"! I don't think so!

Of course, since we were there to write, I took notes of the things about the morning that were blog-worthy, especially from a devotional perspective. Here are the take-aways I have from the adventure:

1. How often in life do we sleep while the water is rising (figuratively)? I was comfortable in my life and totally oblivious to the disaster impending just outside my door. Since I was doing so much research about the Revolutionary War all week, this was especially interesting to me.  Many colonists could not believe that the British would take the actions that they had, and the new Americans probably sat by and watched for a while before realizing action needed to be taken.

2. It is incredibly frustrating to know that something must exist, but not be able to find it. Every home has a water shut off valve, usually in the basement. We walked around all the walls, inside and out, desperately hoping to quell the flow of water. We found the electrical boxes, sprinkler system controls, sewer connections, but no way of shutting off the water. Just as an aside, the leak was before the water shut off valve under the sink, so shutting that off did not good. The builder insisted it was in the closet with the furnace, but there were no water pipes there at all. We finally found it in the closet with the water heater (which some of us didn't realize existed -- it was hidden around a corner), and even when we originally saw it, it looked more like a gas shut off valve.

There are several times in the Bible where people searched desperately for something. A lost coin, a treasure, or even health. The things we want, and even the things we need, are often not where we first look. But if we seek, we will find!

3. Helpless is a terrible feeling. We just sat on the steps watching the bowl fill with water, not knowing what to do. We weren't authorized to call a plumber, and at that point we weren't able to reach the homeowner. At least we had kept the damage from getting worse, but there was no shop vac to allow us to start cleaning up, and the amount of water was way beyond what we could sop up with towels. We needed intervention! Unfortunately this is a common feeling for we humans, especially when we are faced with medical situations. We rush to get a wide variety of tests, only to wait -- sometimes for weeks-- for a diagnosis. In the mean time there is nothing we can do. Any treatment at that point would probably be useless, or even dangerous, because it has to be focused in the right direction. Sometimes all we can do is pray and keep the damage from getting worse.

4. While we sat on the stairs, we racked our brains for what we might have done to bring on this disaster. Did we go under the sink and move things around, possibly loosening a connection? We hadn't stored anything there, nor had we pulled anything out.  So why did we still feel so guilty? Why didn't I hear the water earlier and prevent this much damage? So often we take on guilt or stress for something we didn't cause, and probably couldn't have prevented. It's good to do an assessment to ensure we aren't at fault, but once that's determined, we need to just let it go (oh, Disney fans, I feel a song coming on!).

5. Oh the irony of the broken part being called Flood Free! Kind of like the Titanic being unsinkable. Somehow life will always supersede any claims producers make.

6. And finally, no matter how crazy the situation, there is always a way to laugh if we look hard enough for it! I almost wish we'd thought to take a picture of our lovely selves -- hair still askew from sleep, pajamas rolled up above our knees, splashing around in the water like crazy people.

While it will take a while to get the home back to normal, all is well. The right people are on the job and the two of us who were residing in the basement have moved all our stuff out and we'll spend the night with some of our friends on the top floor. But we'll always remember this year's retreat as an adventure!
Posted by Susan Stitch at 11:51 AM 2 comments:


MY THOUGHTS:
Hold on to your seat! This book will take you on a crazy ride of suspense and intrigue! From a private island mansion to a backwoods cabin, the settings and activities are nonstop. There are a lot of secrets kept silent for years, and as the main characters try to find the truth they really aren't sure whom they can trust.

This is the third book in the  Southern Crimes series, but you don't really have to read them in order (however they are all great, so if you have the time and opportunity, I'd recommend it). Lisa Harris has a gift for keeping the story moving! 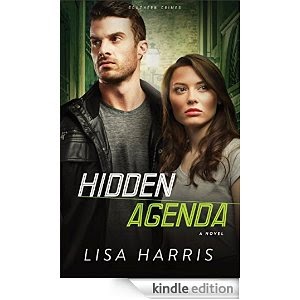 His cover is blown. Now his enemies are on his heels and closing in.
Presumed dead by friends and family, Michael Hunt is alive--and on the run. Presumed dead by friends and family, the undercover assignment he's been working for the past eight months has just been blown. With a hit out on his life and corruption inside the Atlanta police department, Michael finds himself hunted by both the cartel and the law. His only hope is Olivia Hamilton--the daughter of the man who wants him dead.

This nonstop chase from Christy Award-winning Lisa Harris will leave you breathless.

ABOUT THE AUTHOR:
Lisa Harris is the award-winning author of more than twenty books, including the Christy Award winner Dangerous Passage and Fatal Exchange. Winner of the Best Inspirational Suspense Novel for 2011 from Romantic Times, Harris has spent over ten years living with her family as missionaries in Mozambique, where she leads a women's group and runs a nonprofit organization that works alongside their church-planting ministry. Visit www.lisaharriswrites.com for more.


Posted by Susan Stitch at 9:29 AM No comments: