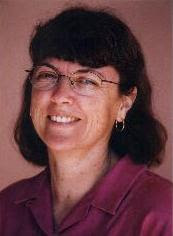 Karen Hancock has won Christy Awards for each of her first four novels--Arena and the first three books in the Legends of the Guardian-King series, The Light of Eidon, The Shadow Within, and Shadow over Kiriath. She graduated from the University of Arizona with bachelor's degrees in biology and wildlife biology. Along with writing, she is a semi-professional watercolorist and has exhibited her work in a number of national juried shows. She and her family reside in Arizona. 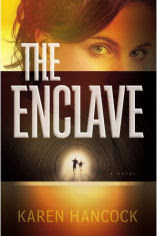 When Lacey McHenry accepts a prestigious research fellowship at the world-renowned Kendell-Jakes Longevity Institute, she sees it as a new start on life. But a disturbing late-night encounter with an intruder leads to an unexpected cover-up by Institute authorities, and she soon realizes there's more going on than she ever imagined.

She finds a supporter in genetics researcher Cameron Reinhardt. However, Reinhardt is a favorite of the Institute's director, and she can't help wondering if he, too, is in on the cover-up. The brilliant but absentminded researcher turns out to have his own secrets, some of them dark and deadly. The Enclave is characterized by adventure, intrigue, spiritual analogy, and romance, all set in an unusual but fully realized world--one that may have its foundations on earth but which, the more one learns of it, doesn't seem much like the earth we know at all.

If you'd like to read the first chapter of The Enclave, go HERE
Posted by Susan Stitch at 8:49 AM