Making up stories has been second nature to me for as long as I can remember. A select group of trusted friends back at dear old Mission High waited eagerly for the next installment of my "Great American Spy Novel" (think Man from Uncle) and my "All-American Teen Novel" (remember Gidget and Tammy?). I even had a private notebook of angst-ridden poetry a la Rod McKuen.

The dream of writing persisted into adulthood, although it often remained on the back burner while I attended to home and family and several "real" (read paying) jobs along the way. Then in 1983, while recovering from sinus surgery, I came upon one of those magazine ads for the Institute of Children’s Literature. I knew it was time to get serious, and the next thing I knew, I'd enrolled in the “Writing for Children and Teenagers” course.

Within a year or so I sold my first story, which appeared in the Christian publication Alive! for Young Teens. For many years I enjoyed success writing stories and articles for middle-graders and young adults. I even taught for ICL for 9 years.

Then my girls grew up, and there went my live-in inspiration. Time to switch gears. I began my first women's fiction manuscript and started attending Christian writers conferences. Eventually I learned about American Christian Romance Writers (which later became American Christian Fiction Writers) and couldn't wait to get involved. Friends in ACFW led me to RWA and the online inspirational chapter, Faith, Hope & Love.

So here I am today, still on this crazy roller-coaster ride. Still writing. Still hopeful. Writing, I'm learning, is not about the destination, it's about the journey. My current projects are primarily women's fiction and romance . . . novels of hope, love, and encouragement. Novels about real women living out their faith and finding love in the midst of everyday, and sometimes not so everyday, situations. 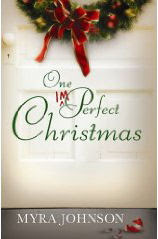 Graphic designer Natalie Pearce faces the most difficult Christmas of her life. For almost a year, her mother has lain in a nursing home, the victim of a massive stroke, and Natalie blames herself for not being there when it happened. Worse, she's allowed the monstrous load of guilt to drive a wedge between her and everyone she loves-most of all her husband Daniel. Her marriage is on the verge of dissolving, her prayer life is suffering, and she's one Christmas away from hitting rock bottom.

Junior-high basketball coach Daniel Pearce is at his wit's end. Nothing he's done has been able to break through the wall Natalie has erected between them. And their daughter Lissa's adolescent rebellion isn't helping matters. As Daniel's hope reaches its lowest ebb, he wonders if this Christmas will spell the end of his marriage and the loss of everything he holds dear.

If you would like to read the first chapter of One Imperfect Christmas, go HERE