Sons of Thunder
by
Susan May Warren 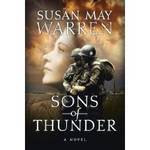 Sophie Frangos is torn between the love of two men and the promise that binds them all together. Markos Stavros loves Sophie from afar while battling his thirst for vengeance and his hunger for honor. Dino, his quiet and intelligent brother, simply wants to forget the horror that drove them from their Greek island home to start a new life in America. One of these sons of thunder offers a future she longs for, the other the past she lost. From the sultry Chicago jazz clubs of the roaring twenties to the World War II battlefields of Europe to a final showdown in a Greek island village, they'll discover betrayal, sacrifice and finally redemption. Most of all, when Sophie is forced to make her choice, she'll learn that God honors the promises made by the Sons of Thunder.

Sons of Thunder launches the new Romantic Suspense line for Summerside Press - it will be available to purchase in Wal-mart mid-January. Also - its uniquely written - its an epic suspense story written as three novellas - 3 points of view, 3 settings.

MY THOUGHTS:
Is there no end to Susan May Warren's talent? I have yet to read one of her books and not be amazed by her ability to sweep me away from my mundane world. She can take any story and deposit her readers into another world within just a few sentences. In Sons of Thunder, she deals with one of my favorite periods of history from a perspective I haven't seen before and she takes the reader from the deep blue ocean of Greece, to the heyday of bootlegging Chicago, to the horrors of WWII and Nazi atrocities. In the midst of those backdrops she adds intrigue, betrayal, heartbreak, and the shame of doing whatever one must to survive.

With a skill that can only be God-given, Susan May Warren weaves this story of love, forgiveness, and redemption into an amazing gift of hope for anyone who reads it.

Susan May Warren is the award-winning author of seventeen novels and novellas with Tyndale, Steeple Hill and Barbour Publishing. Her first book, Happily Ever After won the American Fiction Christian Writers Book of the Year in 2003, and was a 2003 Christy Award finalist. In Sheep's Clothing, a thriller set in Russia, was a 2006 Christy Award finalist and won the 2006 Inspirational Reader's Choice award. A former missionary to Russia, Susan May Warren now writes Suspense/Romance and Chick Lit full time from her home in northern Minnesota. Learn more about Susan here: www.susanmaywarren.com

CONTEST !
Be sure to check out Susan's fun contest for the book's release: Each one of us has a wealth of stories from the past – while they might not all be as sweeping and dramatic as that of Sons of Thunder’s Sofia and the Stravos brothers (swoon), your family history is a treasure nonetheless.

Well – let’s hear them! Were your great-grandparents ‘fresh off the boat’? Was your great uncle a war hero? Did your grandmother make unbelievable sacrifices to help or protect the family? Did your father harbor a family secret until his death? Are you related to someone famous? Do you have a family treasure? Whatever it is that is unique in your family history – share your story HERE! (click on the SHARE button) One grand prize winner will receive:

• Memory Prize package containing a gift certificate to create your own hard cover photo book
• 6 month membership to Netflix (to satisfy that flick fix!)
• Signed copy of Sons of Thunder!

5 runners up will also win signed copies of Sons of Thunder!

Thank you, LitFuse, for providing a copy of this book for review!
Posted by Susan Stitch at 6:55 AM