Award-winning author, DiAnn Mills, launched her career in 1998 with the publication of her first book. Currently she has over forty books in print and has sold more than a million copies.

DiAnn believes her readers should “Expect an Adventure.” DiAnn Mills is a fiction writer who combines an adventuresome spirit with unforgettable characters to create action-packed novels.

Six of her anthologies have appeared on the CBA Best Seller List. Three of her books have won the distinction of Best Historical of the Year by Heartsong Presents. Five of her books have won placements through American Christian Fiction Writer’s Book of the Year Awards 2003 – 2007, and she is the recipient of the Inspirational Reader’s Choice award for 2005 and 2007. She was a Christy Awards finalist in 2008.

DiAnn is a founding board member for American Christian Fiction Writers, a member of Inspirational Writers Alive, Romance Writers of America’s Faith, Hope and Love, and Advanced Writers and Speakers Association. She speaks to various groups and teaches writing workshops around the country. DiAnn is also a mentor for Jerry B. Jenkins Christian Writer’s Guild.

She lives in sunny Houston, Texas. DiAnn and her husband have four adult sons and are active members of Metropolitan Baptist Church. 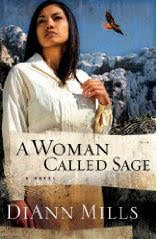 They took away everything she loved...now, she’s out for revenge.

Sage Morrow had it all: life on a beautiful Colorado ranch, a husband who adored her, and a baby on the way. Until five ruthless gunmen rode up to their ranch and changed her life forever. Now Sage is a bounty hunter bent on retribution.

Accompanied only by her majestic hawk, she travels throughout the Rocky Mountains in search of injustice, determined to stamp it out wherever it’s found. The stakes are raised when two young boys are kidnapped and Sage is forced to work with Marshall Parker Timmons to rescue them. But Sage may ultimately get more than she bargained for.

In this exciting historical romance set in the late 1800s, murder, intrigue, kidnapping, and questions of faith will keep you in suspense until the final pages.

If you would like to read the first chapter of A Woman Called Sage, go HERE.

I gave "A Woman Called Sage" to a friend to read and review, and her thoughts are up at Bloggin' Outloud.