The Secret of the Shroud

by
Pamela Ewen
ABOUT THE AUTHOR: 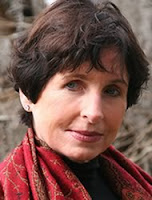 Pamela’s first novel, Walk Back The Cat (Broadman & Holman. May, 2006) is the story of an embittered and powerful clergyman who learns an ancient secret, confronting him with truth and a choice that may destroy him.

She is also the best-selling author of the acclaimed non-fiction book Faith On Trial, published by Broadman & Holman in 1999, currently in its third printing.

Although it was written for non-lawyers, Faith On Trial was also chosen as a text for a course on law and religion at Yale Law School in the Spring of 2000, along with The Case For Christ by Lee Stroble. Continuing the apologetics begun in Faith On Trial, Pamela also appears with Gary Habermas, Josh McDowell, Darrell Bock, Lee Stroble, and others in the film Jesus: Fact or Fiction, a Campus Crusade for Christ production.

Her most recent novel, The Moon in the Mango Tree (B&H Publishing Group, May 2008) is currently available online and in bookstores everywhere. Set in the 1920’s and based on a true story, it is about a woman faced with making a choice between career and love, and her search for faith over the glittering decade. Pamela’s upcoming book, Dancing On Glass, which was recently short-listed as a finalist for the Faulkner/Wisdom creative writing novel award, will be released in the spring of 2011, and she is currently working on a sequel. 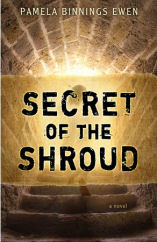 A frightened apostle in AD 33, a tragic child in the 1950s, and a slick, twenty-first century church leader are all linked by the secret of the Shroud of Turin, the purported burial cloth of Jesus-and by something more.

Wesley Bright, a corrupt, media-savvy clergyman, is out to destroy the Christian church of the God who abandoned him in his boyhood. Likable and entertaining, Bright keeps his motives well hidden. But as he seeks revenge, leading the church toward unknowing destruction, the mysterious Shroud of Turin stands in his way.

Strange characters and clues emerge like shadows limned in mist as the most recent discoveries on the Shroud connect the pieces of a fascinating puzzle. When Wesley learns the ancient secret, he’s forced to confront a terrible choice: keep the secret—and the power, wealth, and fame he’s won over the years—or expose it...and lose everything.

At stake is one thing: absolute truth.

If you would like to read the first chapter of The Secret of The Shroud, go HERE.
Posted by Susan Stitch at 10:38 AM