An Eye For Glory

This week, the
Christian Fiction Blog Alliance
is introducing
An Eye For Glory
Zondervan (February 28, 2011)
by
Karl Bacon


MY THOUGHTS:
This book puts you right on the battlefield in the middle of the fight. The writing is crisp and honest, and it is easy to lose yourself in the life of Michael, the main character. I was in tears as he left his family to follow what he felt was his calling to fight for his country. I felt his fright the first time he went to battle. I was frozen in my chair as he found himself face to face with an enemy gun.

Karl Bacon helps us understand the boredom, the frustration, the fear, and the horrible conditions our soldiers faced -- regardless of which side of the battle they were on. He demonstrates the integral part faith played in the every day life of those who weren't sure which day would be their last. And he places us face to face with the struggle of fighting against someone whose political beliefs might be diametrically opposed while they are actually brothers in the faith. Maybe we aren't so different after all.

The book is full of amazing details about the daily life of the soldiers of the civil war -- great for history buffs, but also fascinating for those of us who just want to learn more about our country in an interesting way.

While at first glance this is a book about war, in reality it is a book about the heart of man and the faithfulness of God. It is one that will leave me thinking about how deep my faith really is for a very long time.

A word from the author:

I grew up in the small picturesque town of Woodbury, Connecticut. After graduating from Wilkes University in Wilkes-Barre, Pennsylvania, I returned to Connecticut and found employment in manufacturing. “Just a job” turned into a professional career, much of which was spent working for a Swiss machine tool company. In 2000 I started my own business to provide services to manufacturing clients across the USA. This change also allowed time to develop my writing craft.

From youth I’ve been a serious student of the Civil War. The draft of An Eye for Glory took ten years from conception to completion. Thousands of hours were spent researching every detail through copious reading, Internet research and personal visits to each battlefield so the novel might be as historically accurate and believable as possible. I live in Naugatuck, Connecticut with my wife of thirty-three years, Jackie. 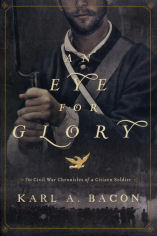 Michael Palmer is a good man, a family man. But honor and duty push him to leave his comfortable life and answer the call from Abraham Lincoln to fight for his country. This 'citizen soldier' learns quickly that war is more than the battle on the field. Long marches under extreme conditions, illness, and disillusionment challenge at every turn. Faith seems lost in a blur of smoke and blood...and death.

Michael's only desire is to kill as many Confederate soldiers as he can so he can go home. He coldly counts off the rebels that fall to his bullets. Until he is brought up short by a dying man holding up his Bible. It's in the heat of battle at Gettysburg and the solemn aftermath that Michael begins to understand the grave cost of the war upon his soul. Here the journey really begins as he searches for the man he was and the faith he once held so dearly. With the help of his beloved wife, Jesse Ann, he takes the final steps towards redemption and reconciliation.

Using first-hand accounts of the 14th Connecticut Infantry, Karl Bacon has crafted a detailed, genuine and compelling novel on the 150th anniversary of the Civil War. Intensely personal and accurate to the times, culture, and tragedy of the Civil War, An Eye for Glory may change you in ways you could have never imagined as well.

If you would like to read the first chapter of An Eye For Glory, go HERE.