ABOUT THE BOOK:
Melody Carlson is one of my top five favorite writers, so I'm always thrilled to read one of her new books. Here's to Friends was no exception.

This book is the fourth in a series about four friends who met in grade school and who all happened to be named Linda. That tenuous link became the golden thread that kept them together through the ups and downs of life. Unfortunately I was not able to read the first three books of the series before I picked this one up, and that made it a bit more difficult. This book would be much more understandable if you knew the back story of each woman.

However, I was able to catch the drift of each woman's history with little trouble and appreciated the real life struggles each dealt with in this book. Melody has drawn the best picture of true friendship and love I've seen in a long time. No sappy speeches or melodrama, just true willingness to stand by a friend through thick and thin and reminding each other that God is in control, despite the circumstances.

Another wonderful book. I hope all of you have wonderful friends like the four Lindas. 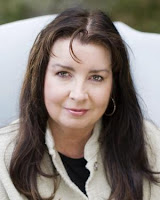 Over the years, Melody Carlson has worn many hats, from pre-school teacher to youth counselor to political activist to senior editor. But most of all, she loves to write! Currently she freelances from her home. In the past eight years, she has published over ninety books for children, teens, and adults--with sales totaling more than two million and many titles appearing on the ECPA Bestsellers List. Several of her books have been finalists for, and winners of, various writing awards. And her "Diary of a Teenage Girl" series has received great reviews and a large box of fan mail.

She has two grown sons and lives in Central Oregon with her husband and chocolate lab retriever. They enjoy skiing, hiking, gardening, camping and biking in the beautiful Cascade Mountains.

Once upon a time in a little town on the Oregon coast lived four Lindas—all in the same first-grade classroom. So they decided to go by their middle names. And form a club. And be friends forever.

Decades later, they're all back home in Clifden and reinventing their lives, but the holidays bring a whole new set of challenges. Abby’s new B&B is getting bad reviews and husband Paul is acting strange. Still grieving for her mom, Caroline is remodeling the family home, but boyfriend Mitch keeps pressuring her to go away with him. Artist Marley, distracted by a friend's family drama (and a touch of jealousy), can't find her creative groove. And Janie’s drug-addicted daughter has just appeared up on her doorstep! When a long-planned New Year's cruise turns into a bumpy ride, they learn once again that, in your fifties, friends aren’t just for fun—they're a necessity!

If you would like to read the first chapter of Here’s to Friends, go HERE.
Posted by Susan Stitch at 8:32 AM

For my shame, I have not heard of this author, but seems very interesting! I will look for her books!