MY THOUGHTS:
This book is the second in the Jevin Banks series. Jevin is an illusionist who does amazing stunts, and he is training others to do them, too. When one of his best students is murdered during a publicly aired event, Jevin is thrown into a search for the killer with terrifying results.

There is a lot of action and many fascinating characters (some are really pretty creepy) in this story, and it kept me on the edge of my seat. Steven James does a wonderful job of researching leading edge topics and takes current day research to a terrifying level of potential reality. I'm not overly fond of books written in first person, but I enjoy James' storytelling so much that it's worth it to work through this.

I hope there are more books in this series -- I'd especially like to see more of Fiona and her home-schooled family! 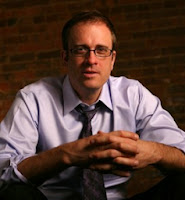 Critically acclaimed author Steven James has written three dozen books, including the Patrick Bowers and Jevin Banks thriller series. He has also penned books spanning the genres of prayer collections, dramas, monologues, a nine-book series on creative storytelling, YA fantasy, and inspirational nonfiction. He has a master’s degree in storytelling and has taught writing and creative communication around the world. When he's not writing or speaking, you'll find him trail running, rock climbing, or drinking a dark roast coffee near his home in eastern Tennessee.

Jevin Banks is searching for a killer--and answers to terrifying questions he never even thought to ask.
·

When his friend is murdered, illusionist Jevin Banks is determined to find out what really happened. Drawn deep into a web of conspiracy and top-secret research on human consciousness, Jevin won't stop digging until the truth is revealed. Soon he uncovers a dark secret that could change the very fabric--and future--of human life on the planet.

Based on frightening scientific realities and bristling with mystery, suspense, and intrigue, Singularity is the riveting sequel to Placebo.


"Steven James knows how to tell a story that gets under your skin and challenges the way you think as only the most talented writers can. If you're looking for a mind-bending tale, strap in and take the ride with Singularity. I can't recommend it highly enough."--Ted Dekker, New York Times bestselling author


Praise for Placebo, the first book in the Jevin Banks Experience

"An edgy, multilayered thriller that may have you fearful every time someone says, 'Oh, I've been thinking about you.'"--RT Book Reviews, 4½ stars

"A full-frontal assault that combines unique characters, a compelling theme, and an incredible story."--Life Is Story

"The kind of action, suspense, and surprises that Steven James fans have come to expect."--CBA Retailers+Resources

"The science is amazing, well-researched, and rather unsettling."--The Christian Manifesto

“Available November 2013 at your favorite bookseller from Revell, a division of Baker Publishing Group.”