Manual to Manhood
by
Jonathan Catherman

MY THOUGHTS:
I gave this book to my twin 14 year-old boys and asked them to read through several sections. I don't know exactly which sections they read, but both of them spent a decent amount of time with the book (that means an hour for one of them and a couple of hours for the other). Now, telling their mom what they thought of the book seemed like a dance for them. They didn't want to act like they had learned anything (because of course, 14 year-olds know everything), so both of them said it was kind of common sense. Well, maybe the chapter on wearing deodorant and brushing your teeth were, but I think that there were a lot of chapters on topics they hadn't even considered, like grilling a steak, changing a tire, and finding a stud in the wall!

I also had my 24 year-old daughter read through it, and I read several chapters. We both thought that it had great topics and that it was a good manual to have around so that you could learn things at just the right time. We did think that several chapters were very shallow -- especially in the section on impressing girls. It includes topics such as talking to a girl for the first time, planning dates, and meeting the girls' parents. I thought it was lacking in the areas of how to treat a girl with respect (for example, it never even mentions opening doors for her), ideas of what to do on a first date (such as determining what she is interested in), or double dating etiquette. As a mom, I was also a bit disappointed in the the social skills and manners section. It talks about how to make a bed, but doesn't deal with manners items such as eating appropriately, phone and text etiquette, or tips on maintaining a conversation. I would have appreciated a section on how to find out more details about things -- who to talk to or what books to read.

This is a good intro manual for preteen and young teen boys, but I would recommend a detailed follow up for those beyond 13 or 14 with much more information about character-building, leadership traits, common courtesy, and relationship skills.


ABOUT THE BOOK (From the back cover):
How to gain respect, avoid embarrassment, and impress everyone! 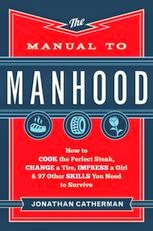 The world needs confident and capable young men. With The Manual to Manhood, you'll be well on your way to becoming one of the best.

Jonathan Catherman is a leading education consultant and trainer specializing in the character and leadership development of youth. He speaks worldwide about the principles and strengths that empower greatness in children, teens, and young adults. As both a parent and a professional, Jonathan is committed to assisting young men in the making to experience success and significance as they mature into manhood and lifelong leadership. Jonathan, his bride, and their boys live in North Carolina. Learn more at www.jonathancatherman.com.

Thank you to Revell Books for providing a copy of this book for review.