MY THOUGHTS:
I am amazed at the way Jill Smith can take just a few verses from the Bible and create an amazing story that makes you feel like you are there. This is the story of Rahab -- a woman that we don't really know much about. Smith gives her a backstory, a tragic situation, and hope for a future with the leader of the tribe of Judah!

All we truly know of Rahab is that she was an innkeeper (which in those days often meant prostitute) who willingly hid some Israelite spies in exchange for safety for her family. Some how later in life she ends up marrying a prominent Israelite and gives birth to Boaz! God can take anyone and use them for the good of his plan.

This is a story of survival, forgiveness, and new beginnings. It is set in an amazing time of history, and the characters have real depth. I would highly recommend this book to anyone who enjoys historical fiction or who wants the Bible to come to life (in an admittedly fictional way). 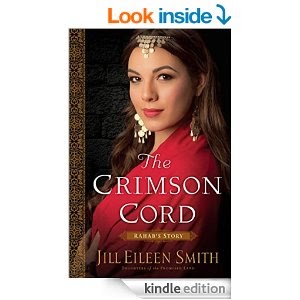 Wife to a gambler who took one too many risks, Rahab finds herself sold as a slave to cover her husband's debt. Forced into prostitution, she despairs of ever regaining her freedom and her self-respect. But when Israelite spies enter Jericho and come to lodge at her house, Rahab sees a glimmer of hope and the opportunity of a lifetime.

In one risky moment, she takes a leap of faith, puts her trust in a God she does not know, and vows to protect the spies from the authorities. When the armies of Israel arrive weeks later, Rahab hopes they will keep their promise, but she has no idea what kind of challenges await her outside Jericho's walls--or if she will ever know the meaning of love.

Under Jill Eileen Smith's talented hand, the familiar story of Rahab bursts forth in high definition. Immerse yourself in a world of dark and dusty streets, clandestine meetings, and daring escapes as a mysterious biblical figure claims her full humanity--and a permanent place in your heart.


ABOUT THE AUTHOR:
Jill Eileen Smith is the bestselling author of the Wives of King David series, the Wives of the Patriarchs series, and The Desert Princess, first in the Loves of King Solomon series. Her research into the lives of biblical women has taken her from the Bible to Israel, and she particularly enjoys learning how women lived in Old Testament times. Jill lives with her family in southeast Michigan. Learn more at www.jilleileensmith.com.
Posted by Susan Stitch at 11:09 AM