No Place To Hide

No Place To Hide
by
Lynette Eason

MY THOUGHTS:
From the first few sentences of the prologue, No Place To Hide takes the reader on a wild race to the finish. Ian Lockwood is being chased by the FBI for possible treason and he's being chased by the bad guys who want to be sure he doesn't foil their plot. Jackie Sellers is a long time friend who works for Operation Refuge, an organization that protects those who have no where to turn.

This is the third book in the Hidden Identity series, but it definitely can stand alone. There is a lot of action and violence in this book (not graphic), and the read really needs to focus on the story to keep up with it all. I feel like I missed a few things and occasionally had to back track to keep it straight.

I really enjoy Eason's books. She does a fabulous job of researching a story and definitely keeps a reader on the edge of her seat! This is definitely a Christian book, but it doesn't preach or throw religion in your face. She keeps it realistic based on the needs of the character, and each basic character is confronted with God in a way that helps him or her grow during the process.

There were a few too many coincidences and character links in this story to make it feel real, but that doesn't take away from the action and sense of adventure one gets as you race toward a potential disaster.

A very creative and exciting book! You can get a copy of it here! 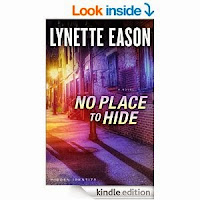 She'll defend her friend until the bitter end--but is she in over her head?
It's not every day you see your childhood friend and onetime crush on national news. Jackie Sellers just wishes it were under different circumstances. She can't believe that Ian Lockwood is wanted in connection with a terrorist plot, and she's determined to find him and help him clear his name. Unfortunately, she's not the only one looking for him. The FBI wants him captured. The bad guys want him dead. Ian just wants to stay alive long enough to prove his innocence and prevent a catastrophe.

Lynette Eason delivers nonstop action as Jackie and Ian travel a dangerous road--one that may lead straight to destruction.

\Lynette Eason grew up in Greenville, SC. Even as a young girl, she knew she wanted her life to reflect the love of Jesus Christ.
After graduating from the University of South Carolina with a Business Degree she used for a very short time (sorry Mom and Dad), she moved to Spartanburg, SC to attend Converse College where she obtained her Masters degree in Education. During this time, she met the man she would marry—the boy next door!
She is married to Jack Eason, who speaks, leads worship, and consults ministries around the country. They have two children.
Lynette’s books have appeared on the ECPA and CBA bestseller lists and have won several awards


Thank you to Revell Books for providing a copy of this book in exchange for my honest review.
Posted by Susan Stitch at 9:07 AM