Playing the Part
by
Jen Turano


MY THOUGHTS
I have been waiting for so long (it seems) to read this book -- Jen Turano does such a good job of creating her characters that I long to read more about them. Whenever I pick one up I feel like I'm about to have an adventure with an old friend. Playing the Part gives the reader time to get to know Lucetta Plum, the beautiful actress we've met a few times in prior books.

As usual, Jen creates a whirlwind of activity surrounding some romantic tension and lots of laughs to bring another time in history alive. This book left me thinking about the story line for a long time after I was finished -- each character plays a part in their lives that others perceive as the real 'them'. As we all do in real life I suppose. As a result I've done a good bit of thinking about who I am really versus who others perceive me to be. Good fodder for prayer and contemplation!

Jen has turned out another winner. Playing the Part is full of quirky characters, fabulous homes, great friends, a huge dash of intrigue, and of course a few fun animals that add life and laughter. I'm already looking forward to her next book! 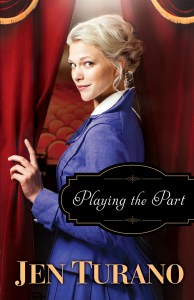 Lucetta Plum is an actress on the rise in New York City, but is forced to abandon her starring role when a fan’s interest turns threatening. Lucinda’s widowed friend, Abigail Hart, is delighted at the opportunity to meddle in Lucetta’s life and promptly whisks her away to her grandson’s estate to hide out.
Bram Haverstein may appear to simply be a somewhat eccentric gentleman of means, but a mysterious career and a secret fascination with a certain actress mean there’s much more to him than society knows.
Lucetta, who has no interest in Abigail’s matchmaking machinations, has the best intentions of remaining cordial but coolly distant to Bram. But when she can’t ignore the strange and mysterious things going on in his house, it’ll take more than good intentions to keep her from trying to discover who Bram is behind the part he plays.
ABOUT THE AUTHOR 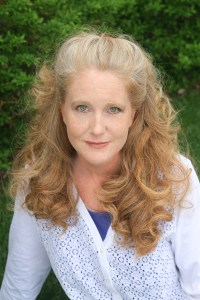 Jen Turano is the critically acclaimed author of The Ladies of Distinction Series, published through Bethany House.  Her novel, A Most Peculiar Circumstance, was chosen by Booklist as a Top Ten Romance for 2013.
Playing the Part is Jen's eighth book, and the third book in the A Class of Their Own series.
When Jen’s not writing, she spends her time hiking around Colorado, socializing with friends and family, and taking great pride in watching Dominic, who will soon be off to college, turn into a remarkable young man.  (For readers of A Change of Fortune – Dominic was the inspiration behind little Ben – which is why you won’t be surprised to learn Jen’s been slightly taken aback over the fact Dominic’s turned out so well.)
Learn more about her, her books, and the Guilded Age at her website, HERE.