MY THOUGHTS
Have I said before that I love Irene Hannon's books? Every one I read is better than the last. She develops wonderful series based on complex characters who find themselves in difficult but realistic situations. I am holding her personally responsible for my laundry not getting done and dinner not being ready on time -- her books are SO hard to put down!

Tangled Webs takes place in central Missouri in the Mark Twain Forest region, where coincidentally I was travelling the same weekend I read the book. Her descriptions of those who hide in the woods to make meth had me looking carefully around ever turn, adding additional suspense to a book that I was already having a tough time putting down.

It is not necessary to read the first two books in the Men of Valor series, Buried Secrets and Thin Ice, but it helps to give a bit of background on the McGregor hunks. It was extremely satisfying to finally learn Finn's secrets and to meet him 'up close and personal'. If you like suspense, I highly recommend this book and any of Irene Hannon's work. 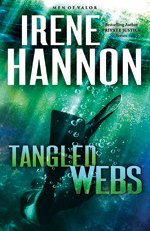 After a disastrous Middle East mission ends his six-year Army Ranger career, Finn McGregor needs some downtime. A peaceful month in the woods sounds like the perfect way to decompress. But peace isn't on the agenda once he crosses paths with publishing executive Dana Lewis, a neighbor who is nursing wounds of her own. Someone seems bent on disrupting her stay in the lakeside cabin she inherited from her grandfather. As Finn and Dana work together to discover who is behind the disquieting pranks, the incidents begin to take on a menacing tone. And when it becomes apparent Dana's foe may have deadly intent, Finn finds himself back in the thick of the action--ready or not.
Bestselling author Irene Hannon draws readers into a web of psychological suspense where danger lurks in dark corners . . . and keeps them captive until the very last page.

Irene Hannon is a bestselling, award-winning author who has written more than 50 romantic suspense and contemporary romance/women’s fiction novels. She is a seven-time finalist for and three-time winner of the RITA award—the “Oscar” of romance fiction—and a member of the Romance Writers of America Hall of Fame. Her books have also won a Daphne du Maurier award, two Carol awards, three HOLT Medallions, a National Readers’ Choice award, a Retailers Choice award, two Booksellers’ Best awards and two Reviewers’ Choice awards from RT Book Reviews magazine. One of her novels was also named by Booklist as a top 10 inspirational fiction books of 2011. In addition, she is a two-time Christy award finalist.

Irene, who holds a B.A. in psychology and an M.A. in journalism, juggled two careers for many years until she gave up her executive corporate communications position with a Fortune 500 company to write full time. She is happy to say she has no regrets!

In her spare time, she enjoys cooking, gardening and singing.  A trained vocalist, she has sung the leading role in numerous musicals, including “South Pacific,” “Brigadoon,” “Oklahoma” “The King and I” and “Anything Goes.” She is also a soloist at her church.

When not otherwise occupied, Irene and her husband enjoy traveling, Saturday mornings at their favorite coffee shop and spending time with family. They make their home in Missouri.
Posted by Susan Stitch at 9:40 AM