Behind the Scenes
by
Jen Turano


MY THOUGHTS
If you have ever been stuck on the sidelines in a wallflower position, you will absolutely love this book! Jen Turano has once again created a delightful historical romance that will have you laughing and cheering on the characters as they struggle with a dastardly threat that puts their lives at risk. Miss Permilia Griswold is a feisty young woman who has been relegated to the sidelines because of her father's financial demise. In an unprecedented move she becomes friends with the other women who for whatever reason are relegated to the sidelines of posh New York society.

Turano has an amazing way of causing her readers to fall in love with characters who are so honest and flawed that one can't help but hope for their success against all odds.

Honestly, I will read every book Jen Turano writes! They are all delightful. 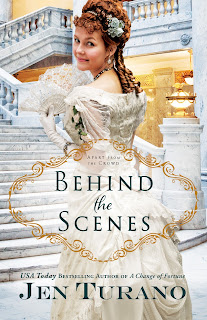 (From the back cover)
After spending the last six years banished to the wallflower section of the ballroom, Miss Permilia Griswold has finally figured out a way to pass the time at all the New York high-society events she attends. Under the pseudonym "Miss Quill", she is the author of society gossip columns filled with tidbits only an insider in society -- albeit one on the fringes-- would know.

When she overhears a threat against Mr. Asher Rutherford, the owner of one of the most up-and-coming department stores in the city, she's determined to warn him. But the irritatingly handsome man doesn't believer her, leaving her no choice but to take matters into her own hands. What she doesn't anticipate is that she'll end up putting herself at risk in the process -- or that she and Mr. Rutherford, a man with secrets of his own, just might end up joining forces after all.

ABOUT THE AUTHOR:
A USA Today Best-Selling Author, Jen Turano has written the critically acclaimed Ladies of Distinction series, and A Class of Their Own series, published through Bethany House Publishers. Her novel, After a Fashion, was chosen as a top pick from Romantic Times, as

well as being named a top ten romance of 2015 from Booklist.  It is also a nominee for Romantic Times 2015 Reviewers’ Choice Award. Her book, A Most Peculiar Circumstance, was chosen as a top ten romance by Booklist in 2013. Her seventh book, Playing the Part, released in the spring of 2016, and will be followed by a new four-book series, Apart from the Crowd. When she’s not writing, Jen spends her time outside of Denver with her husband and neurotic Cattle Dog, enjoying herself as an empty-nester since her son recently abandoned her for the college life. She can be found on Facebook At https://www.facebook.com/jenturanoauthor/ or visit her on the web at www.jenturano.com. She is represented by the Natasha Kern Literary Agency. Her books may be found in fine bookstores, or follow the Baker House Publishing link to find additional places to purchase her work – http://bakerpublishinggroup.com/authors/jen-turano/1761
Posted by Susan Stitch at 4:24 PM