My Thoughts:
While Tricia Goyer has written several historical novels, this is her first novel that is not set in the midst of wartime. I really liked the concept of this story -- Julie Cavanaugh, an orphan herself, is an assistant caretaker at a New York City orphanage. When the orhpanage closes its doors, she escorts the children across the country to new families via an orphan train. To her horror, as she delivers the final children she discovers that her ticket isn't for a round trip as she had expected -- instead she's been sold as a mail order bride!

The story includes several masterfully intertwined story lines that kept me turning the pages late into the night. As a team, Tricia and Ocieanna write with a single voice that is easy to lose yourself in. You can feel the grit of a weeks worth of dirt from train travel, see the bugs falling in from the ceiling of the soddy, and smell the fear as you face an injured buffalo. I look forward to more books from this awesome team!

You can buy the book at Amazon.com

Julia Cavanaugh has never left New York City. But in 1890, the young woman must head west to ensure that the orphans under her care are settled into good families. After her final stop in Montana, she plans to head straight back east. But upon arriving in the remote town of Lonesome Prairie, Julia learns to her horror that she is also supposed to be deliveredinto the hands of an uncouth miner who carries a bill of purchase for his new bride. She turns to a respected circuit preacher to protect her from a forced marriage but with no return fare and few friends, Julias options are bleak. What is Gods plan for her in the middle of the vast Montana prairie?

ABOUT THE AUTHORS:
Tricia Goyer

Tricia Goyer is the author of twenty books including From Dust and Ashes, My Life UnScripted, and the children's book, 10 Minutes to Showtime. She won Historical Novel of the Year in 2005 and 2006 from ACFW, and was honored with the Writer of the Year award from Mt. Hermon Writer's Conference in 2003. Tricia's book Life Interrupted was a finalist for the Gold Medallion in 2005. In addition to her novels, Tricia writes non-fiction books and magazine articles for publications like Today's Christian Woman and Focus on the Family. Tricia is a regular speaker at conventions and conferences, and has been a workshop presenter at the MOPS (Mothers of Preschoolers) International Conventions. She and her family make their home in the mountains of Montana.www.triciagoyer.com 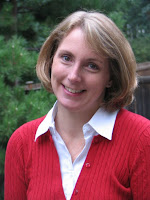 Ocieanna Fleiss is a published writer and has edited six of Tricia Goyer's historical novels. She lives with her husband and their four children in the Seattle area. Connect with Ocieanna on Facebook!

Read an excerpt!
Posted by Susan Stitch at 10:15 PM