The Influenza Bug
by
Paul McCusker and Walt Larimore

MY THOUGHTS:
Terrorism, medical mysteries, and impending destruction of a majority of the human race make for a edge-of-your seat book that will make you want to wear a medical mask! Check this one out next time you are ready for suspense that is just a little too realistic... 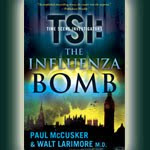 Influenza killed 20-100 million worldwide in 1918. We never discovered why or how to stop the virus. Now, it's back and the Time Scene Investigators (an international team that probes past medical disasters to prevent future outbreaks) must solve the riddle that has gone unanswered for nearly 100 years - before millions more die.

Masses of people are dying from a mysterious flu. While the TSI team searches for a cure, a notorious eco-terrorist group,Return to Earth, uses an influenza bomb to poison the water. It’s a race against time—with the outcome impacting the entire world.

By the time the team discovers that the terrorists are using the water supply to infect people, the sickness is spreading worldwide and no one has a cure. When Return to Earth makes off with a mysterious device called the influenza bomb with the intent to destroy all of mankind, Dr. Hutchinson must stop the contamination from being spread before it’s too late.

Paul McCusker (Creative Director, Focus on the Family) and Walt Larimore, M.D. (nationally renowned physician) display their considerable story-telling talents with THE INFLUENZA BOMB, in stores June 1 from Howard Books.
Posted by Susan Stitch at 8:21 AM

I loved this one and the first TSI. I'm definitely looking for them in the future. I hope the series will continue for a good long while.