Bridge to a Distant Star


MY THOUGHTS:
From the beginning, I knew this book would end in tragedy when Tampa Bay bridge collapses in a storm. Carolyn Williford creates three compelling stories that cause the reader to fall in love with the characters that will ultimately end up on that bridge.

I appreciated the way she created the trilogies to mask who drives onto the bridge at the wrong moment until near the end of the stories. While there is some foreshadowing, it's hard to tell who will be in the accident and who will survive.

The conversations in the text were very realistic. I loved the really awkward, even realistically uncomfortable way Emilie's friends dealt with the breakup and subsequent repair of her marriage. They definitely didn't say the 'right' things or what would have been expected of 'good' Christians -- however Williford was right on the mark with what happens in the real world.

This is a book that stays with you for a while. Each story deals with heavy issues faced by people trying to live strong for God while faced with real world temptations, fears, and hardships. In the end, not everything is fair, but as always God is in control and sometimes that is all we need to know.
ABOUT THE AUTHOR: 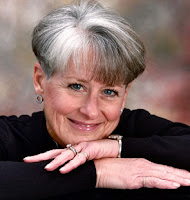 Carolyn Williford has authored seven books, including Jordan's Bend, Devotions for Families That Can't Sit Still, and Faith Tango, as well as numerous articles. She and her husband, Craig, live in Deerfield, Illinois, where he serves as president of Trinity International University. They have two children and four grandchildren.

It All Comes Tumbling Down

As a storm rages in the night, unwary drivers venture onto Tampa Bay’s most renowned bridge. No one sees the danger ahead. No one notices the jagged gap hidden by the darkness and rain. Yet when the bridge collapses vehicles careen into the churning waters of the bay below.

In that one catastrophic moment, three powerful stories converge: a family ravaged by their child’s heartbreaking news, a marriage threatened by its own facade, and a college student burdened by self doubt. As each story unfolds, the characters move steadily closer to that fateful moment on the bridge. And while each character searches for grace, the storms in their lives loom as large as the storm that awaits them above the bay.

When these characters intersect in Carolyn Williford’s gripping and moving volume of three novellas, they also collide with the transforming truth of Christ: Deny yourself, take up your cross, and follow me.

If you would like to read the first chapter of Bridge to a Distant Star, go HERE.
Posted by Susan Stitch at 4:35 PM