Flights of Fancy
by Jen Turano

MY THOUGHTS:
I am always excited to hear that Jen Turano has a new book, and Flights of Fancy introduces a whole new series, American Heiresses! I have no idea how Turano continues to come up with incredibly creative and humorous characters, but each book is better than the one before. Flights of Fancy brings a whole new level of fun.

Isadora Delafield has been trained all her life to become a respectful wife to a high society gentleman. When her mother discovers a widowed duke from England who is interested in her daughter, she will go to all lengths to see them wed. Never mind that the duke is a lecherous old man whose two former wives died in suspicious circumstances. To save her future, Isadora is whisked away from New York to the outskirts of Pennsylvania to answer an advertisement requesting a maid.

It is soon obvious that Isadora is not capable of such a job, but through a series of hilarious mishaps she is hired to help a household that includes an older woman with a broken leg, an older man who seems just a bit crazy, and four orphaned children. The home is, of course, also the childhood home of the hunky and important businessman, Ian MacKenzie.

Turano's books are always a whirlwind of activity, intrigue, and laughs. They are fast reads because I just can't seem to put them down -- I'm so fascinated to see what incredible situations the heroine will find herself in next! If you like books that take you away from the stress of everyday life and make you laugh, I highly recommend this book! 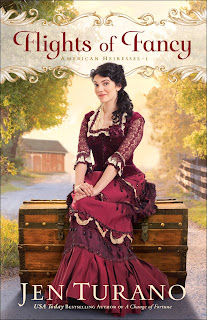 Miss Isadora Delafield may be an heiress, but her life is far from carefree. When her mother begins pressuring her to marry and elderly and uncouth duke, she escapes from the high society world she's always known and find herself an unlikely candidate for a housekeeper position in rural Pennsylvania.

Mr. Ian MacKenzie is known for his savvy business sense and has built his reputation and fortune completely through traditional hard work. But when his adopted parents are in need of a new housekeeper and Isadora is thrown into his path, he's unexpectedly charmed by her unconventional manner.

Neither Isadora nor Ian expected to find the other so intriguing, but when a chain of mysterious incidents on the farm point to a larger threat, they'll have to set aside everything they thought they wanted for a chance a happy-ever-after.

A USA Today Best-Selling Author, Jen Turano has written the critically acclaimed Ladies of Distinction series, and A Class of Their Own series, published through Bethany House Publishers. Her novel, After a Fashion, was chosen as a top pick from Romantic Times, as well as being named a top ten romance of 2015 from Booklist.  It is also a nominee for Romantic Times 2015 Reviewers’ Choice Award. Her book, A Most Peculiar Circumstance, was chosen as a top ten romance by Booklist in 2013. Her seventh book, Playing the Part, released in the spring of 2016, and will be followed by a new four-book series, Apart from the Crowd. When she’s not writing, Jen spends her time outside of Denver with her husband and neurotic Cattle Dog, enjoying herself as an empty-nester since her son recently abandoned her for the college life. She can be found on Facebook at https://www.facebook.com/jenturanoauthor/ or visit her on the web at www.jenturano.com. She is represented by the Natasha Kern Literary Agency. Her books may be found in fine bookstores, or follow the Baker House Publishing link to find additional places to purchase her work – http://bakerpublishinggroup.com/authors/jen-turano/1761

Thank you to Baker Publishing Group for providing a copy of this book for review. The opinions stated here are entirely my own.