The Bone Is Always Crunchier. . .

As a psychology major I always enjoy watching the behavior of others, especially dogs and children. This morning I gave both of our dogs rawhide bones in an attempt to quiet their noisy wrestling match.

They spent approximately fifteen minutes trying to get each others' bone, thinking that for some reason the other bone was better than the one they had in their own mouth. Scamper, the smaller dog, was especially guilty of this. Jack, our 10 month old big puppy, would just look up at me with his big eyes as if saying, "Mom, she took my bone again!" I'd just tell him that it was ok, and gave him the other one, which he happily took and started chomping away. At which point Scamper would look up suspiciously and start watching for an opportunity to switch again!

They both chewed their own bones for a while, but their eyes stayed on each other the whole time. I know if one of them would have gotten up for a split second the bones would have been switched again.

Eventually Scamper left her bone completely and she just sat in front of Jack watching him eat (see photo). After a while he loosened the end piece of the bone and it fell off. She started chewing on it, still leaving the entire bone at her side, instead enjoying his slimy cast off. What a hoot! I guess she could prefer it pre-softened. 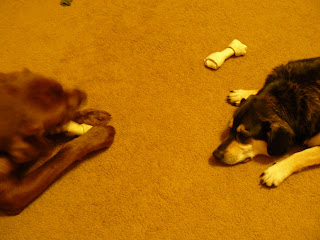 Our twin boys aren't much different. Each believes that his brother has the bigger piece, the better cards, the preferred toy, even if the initial choice was his. He will often stop playing with his toy and starts begging for a turn with the others' toy.

How often do we, as adults, do the same thing? We want what someone else has so desperately that we forget the blessings that we hold in our hands at the moment. And, if perchance we are able to obtain the thing we coveted, don't we start to covet what yet someone else has within moments of that accomplishment? A bigger house, nicer car, cool vacation, more children, fancier clothes, more toys -- it doesn't really matter what the 'it' is.

What are you overlooking today by seeking what others have?
Posted by Susan Stitch at 7:20 AM