Yesterday was a rough day. I had a really hard time making any headway. I only wrote another 750 words on the manuscript itself, and I spent a lot of time staring at my wall trying to figure out what to keep, what to leave out, and how to weave a couple of key story lines into the whole thing.

I did write the intro to the book, which helped me set the scope/timeline, and I determined the 'purpose' or theme of the book. I also spent a lot of time researching how Christians were killed by the Romans in the 1st century -- pretty gruesome.

One fascinating fact I learned was that cockroaches are the only critter on earth that can live with their heads cut off. They do eventually die from starvation, but they don't need the head for any function other than eating! So if you are trying to eliminate one of these bugs from your life, do more than just cut off its head.

In an attempt to do something that seemed productive, I watched The Passion of Christ last night and took notes about clothing styles!

I was up until midnight again and had decided I'd sleep in this morning. Except that I woke up at 5:30 again. I rolled over and attempted to go back to sleep only to be startled by a noise my computer made...almost like it was turning itself on. Ok...got the message. I thought I'd write for the two hours I've spent in previous mornings watching the sunrise, but I felt compelled to go outside even though it was only 35 degrees outside (I actually just looked to see how cold it was this morning...it didn't feel THAT cold). I wrapped up in my robe and two blankets, took my coffee and my gloves and sat to watch what I figured would be a pretty boring sunrise since the sky was totally cloud-filled and it  was even sprinkling.

It occurred to me that I was expecting God to dazzle me with the sunrise. Hmmmm, I'm no different than the people who followed Jesus just to see him do miracles. That was a bit humbling. I also realized that despite the fact I couldn't see it, the sunrise was STILL there, just like God is when we can't see him. Maybe there is a barrier he puts in the way, like clouds, or a barrier man puts in the way, like buildings, or that we choose to put up ourselves, like me sitting on a covered porch instead of out in the open because of the rain. Doesn't matter -- God is still God and the sun still rises faithfully every morning. How often to I forget that he's there just because I can't see him?

I learned that there is still a fabulous sunrise even on a rainy day. There are hundreds of shades of blue, gray, and white that appear or disappear depending on the stage of the sunrise -- and these differences can't necessarily be seen once the sun is fully up. I also got a glimpse of the more glorious colors of the sunrise when I was visited by a little House Finch who landed on the porch light and talked to me for a few minutes! 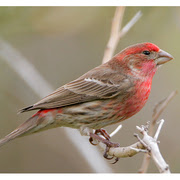 All in all I had a very meaningful quiet time. I never stop to take two hours to pray, listen, and journal when I'm home, and if nothing else comes from this trip this has been an amazing blessing to me.

Today I really want to make some headway on the book. I'm just going to close my eyes, pick a note card, and start writing that part of the story. I'll work it all out later in a future draft, but I just need to get words on paper (or on the computer screen). I've set a goal to have at least 10,000 words done by the time I leave (which is really not that much -- many people can do that in a day), but this is somewhat of a struggle for me at the moment. Storytelling is very different from non-fiction!
Posted by Susan Stitch at 10:31 AM