Gone Without A Trace


Gone Without a Trace
by
Patricia Bradley


MY THOUGHTS:
This is a great detective story! A serial kidnapper is on the loose, and his activity is escalating. A young woman has been kidnapped and her time may be running out. Alex Reynolds is the PI on the case, and he has extra incentive to solve the case -- if he doesn't find her within three weeks his grandfather will force him to take steps toward a career that will stifle him.

He meets up with Livy Reynolds, a detective who is reeling from a questionable shooting and a subsequent 'freeze up' that could have resulted in her partner's death. Livy also has an ulterior motive in this situation -- her cousin Robyn disappeared two years earlier without a trace, and it is suspected that perhaps she was the victim of similar foul play.

This is a pretty straight-forward detective story with plenty of viable suspects and a lot of suspense toward the end. The characters are well-rounded and realistic, and I found myself cheering for their victories. I'm hoping that Patricia Bradley will write more books in this series -- I'd love to learn more about how their lives turn out!

ABOUT THE BOOK:
The past is repeating itself--and time is running out

It's been more than two years since homicide detective Livy Reynolds's cousin disappeared from Logan Point. Unlike most people in her hometown, Livy has never believed that Robyn left voluntarily. When Dallas private investigator Alex Jennings contacts her concerning a senator's missing granddaughter who was last seen in Logan Point, Livy notices eerie similarities between the two disappearances. With self-doubt plaguing her and an almost instant dislike of the self-assured PI, she's finding this investigation an uphill battle. But with the prospect of finding her cousin on the horizon, she'll have to find a way to work with Alex--before it's too late.

Award-winning author Patricia Bradley keeps you on the edge of your seat with a case--and a relationship--that is anything but certain.

"Patricia Bradley has hit a home run. The suspense is high, the romance is sweet, and the villain is one you want to see caught and brought to justice. Gone without a Trace, a novel of forgiveness and finding one's place in the world, brings home the point that while not everything in life may go the way you want, God is still in control. Can't wait for the next book!"--Lynette Eason, bestselling, award-winning author of the Hidden Identity series 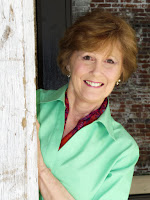 Patricia Bradley is the winner of a 2012 Daphne du Maurier Award and a 2012 Touched by Love Award and was also a finalist for the 2012 Genesis Award. The author of Shadows of the Past and A Promise to Protect, she is a member of American Christian Fiction Writers and Romance Writers of America. Bradley makes her home in Mississippi. Learn more at www.ptbradley.com. SIGN UP
Posted by Susan Stitch at 2:56 PM