Yesterday Was a Big Day 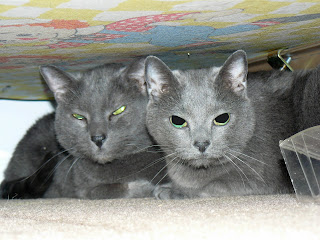 Jack went to the doctor to get 'fixed'...and he didn't even know he was broken! Doug had a heck of a time getting him through the door. I can't imagine that he'd ever been to this particular location before since we adopted him from people who live more than an hour away.

Jack ran the opposite direction and even worked his way out of his collar once. Luckily Doug was able to catch him and put the collar back on. He finally got Jack through the first set of automatic doors and then Jack decided he would have no more of it -- or maybe he'd heard what goes on in places like this. Jack sat down and absolutely refused to move. Doug had to pull the rug through the second set of automatic doors to get the silly dog into the waiting room! I wonder if the doctor will cut the sutures out on the sidewalk. There is NO way we'll get him in this place a second time after he has surgery.


Scamper was absolutely pathetic all day. First Sam disappeared, now Jack just as she was beginning to like him...what goes on around this place?

We got a phone call from the vet around 2:00 and Jack did 'fine'. He got home around 6:00. About 7:30 Sammi and her boyfriend Sam arrived with two cats -- Elvis and Kitty, who are going to live at our house for up to a week while we try to find them new homes. Know anyone who wants two older, sweet cats who are fixed, declawed, and up to date on shots?

Things are never boring around our house!
Posted by Susan Stitch at 9:54 AM