It's Never Boring Around Here 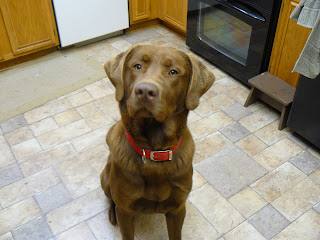 Ahh, the joys of pet ownership!

For various reasons, we got a new pet this week, Jack. He's a nine month old chocolate lab, and he's a BIG puppy who has grown into his feet but hasn't quite filled out enough to match his head! He's had some basic training -- if you work hard enough he will sit, lay, come, and stay, but he has to really want to. He also thinks he's a lap dog and he doesn't understand why he can't sleep on our full size bed (despite the fact that he takes up the whole thing).


He's actually relatively docile, but he loves to play. I figured Scamper would love the opportunity to mother him, since she really liked that role with Sam. I think I misread her. I've since decided she likes to be the bossy big sister (a role that is unfortunately rather near and dear to my heart...).


When they first met, Scamper was a bit taken back. This dog is at least 1 1/2 heads taller than she and he tends to get a little personal! We hope neutering him will help with that. He really just wanted to play with her -- she would bark her fool head off and he would just wimper. He even got down on the ground as if to say, "It's ok, I'll let you be the boss if you want to." Amazing from a male dog. They had a few little show downs before Scamper decided that he really didn't want to harm her and we really weren't going to ignore her for this big lug.

Jack has been raised with doggy toys. Our dogs have never really had toys other than balls, frisbees, and pull toys, so this is a new thing for us. It is really funny to see this 80 pound dog walk around with a teeny McDonald's Happy Meal stuffed kitten in his mouth! Not very manly. Of course he doesn't know what is ok to play with and what isn't, so we are learning to keep stuff up off the floor, and I'm always on the alert for sounds of chewing.


Yesterday I heard some chewing and went to check it out -- Scamper had the little kitten and was pulling the stuffing out of it! This from a dog who NEVER touched a stuffed animal before! Hmmm...a little resentment you think?

Scamper has definitely got the big sister role down well, though. This morning I guess Jack was a little bored and he at various times got caught with the following in his mouth:

the food cup
Chris's shoe
a boy's winter glove
a sock
a baseball glove
Scamper's bone (that was her own fault - she likes to save them for later)
Kevin's shirt (he happened to be wearing it at the time...)
and a big stuffed bear

When she sees that Jack has something, she starts barking like crazy, as if to say, "Mom, he's doing it again!" She doesn't stop until I take the toy away or tell her that that one's ok to play with.

As I watch them wrestling now, it's humorous. Scamper is still the loud one, but she doesn't run away. He puts a paw on her back and tries to roll her over (reminiscent of 'pinned ya' from the lion king'), and she tries to run between his front legs, causing him to almost somersault in an attempt to get at her! They'll go on like this for about ten minutes before they tire out and end up laying next to each other playing 'whose leg is on top' by trying to get their own leg on top of the other one's head. Hilarious!


Jack and the cat get along fine -- they both ignore each other totally. The cat decided to check him out a little the other day, and he thought she wanted to play. She turned and ran, and he wanted to take off after her. I was nervous for a second because he can run fast, but he was on the laminate floor -- it was like a scene from a cartoon. The faster he ran, the less he moved!


My days are definitely a little more full now...and I have to say that I feel MUCH more secure! Jack's barks, when he chooses to use them, rattle the windows!
Posted by Susan Stitch at 8:46 AM