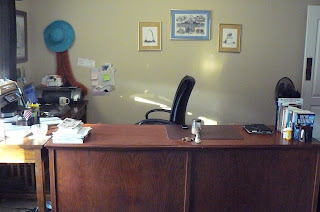 I spent my 15 minutes cleaning yesterday, and realized that the mess had just gotten bigger. There was no way I could stop, so I ended up spending about an hour getting things put away, thrown away, and even given away. I came into my office this morning and smiled.

Yesterday I donated three items through Freecycle.org, a great yahoo group that links up people with excess stuff with those who need that stuff! No money changes hands, and everybody is happy -- including landfills that don't get new stuff. Check it out -- I've given away a ton of stuff  and gotten some really great things.

I also put a bunch of books that I had on my desk but only used occasionally back on bookshelves (where they'll get a little less dusty), freeing up a ton of space. And I filled up a paper grocery sack with recyclable old paper.

But I have to say, all that empty space worries me. I know myself, and when I'm rushing round I tend to stack things on any empty space that is available. I thought about getting something large and pretty to put on the far end of the desk that doesn't get used much, but I don't want to add something that is just clutter.  It made me think of the scripture from Luke 11:

24 “When an evil[h] spirit leaves a person, it goes into the desert, searching for rest. But when it finds none, it says, ‘I will return to the person I came from.’ 25 So it returns and finds that its former home is all swept and in order. 26 Then the spirit finds seven other spirits more evil than itself, and they all enter the person and live there. And so that person is worse off than before.” (NLT)

I'm not saying that my propensity to pile stuff is a demon, but I do know that an empty, horizontal space in my home is an invitation for even more piles that it had originally! So I decided to move the books I DO use regularly down to the end, making that space useable AND full. I need to train myself to enjoy the peace of an empty space.

But now I feel like 'I've done it' and I'm having trouble committing to my 15 minutes today. After all, it's SO much better, right? But look hard. there is one pile on the left side of my desk that is just waiting to grow/reproduce. And back by the wall is a letter holder that is overflowing. Gotta deal with those. And I haven't even started on the floor or drawers.

I have to fight that 'good enough' feeling and really get it all done, or I'll be right back where I started -- probably by the end of the day!at

Thanks for the kind words of support and the admissions that you, too, deal (or maybe DON'T deal) with clutter. It helps to know I'm not alone. So, anyone have any cleaning stories or pictures to share?